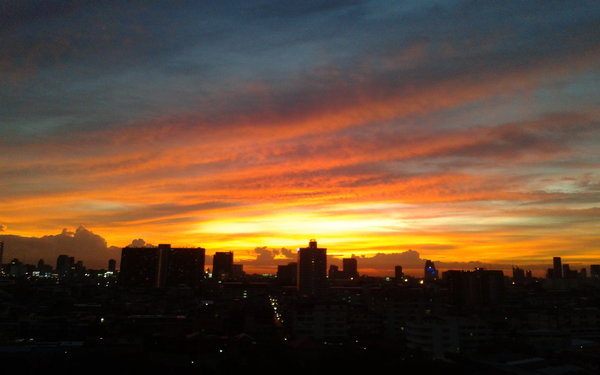 He strolls over the paths of the earth with only a few travel possessions. In his bag, you will not find a camera, souvenirs, guidebooks or an extra pair of toenail clippers. Because of his love for mild climates, he also does not need much clothes to keep him warm, after the sun sells him the stars. Sometimes, he does not even wear shoes. At those moments, he likes to stroll on the pleasant sand of a beach, dipping his toes in the warm, late afternoon sand and watching the wind chase golden colored waves onto the shore, that is enough to make him happy.

He does not need expensive cameras, smartphones or gasoline gobbling vehicles to make his vacation worthwhile. Instead, he values conversations, eye contact, a simple handshake and a smile. He likes to experience these valuable human interactions while he walks to his next destination.

The first and most important thing that he left behind before the start of his journey, was the idea that money keeps you on the road. However, there is so much more to see when you travel with less speed and spend less money. He learned to appreciate his feet. They are the ones who keep him moving, while his eyes, nose and ears keep him moved.

The longer he travels, the less important the destination becomes. Instead, the journey itself, rises in value. Movement is freedom, standing still is a prison. For him, it stand for the accumulation of possessions, prejudices and valuables. But now he has thrown those things away and he is liquid once again. More and more, his possessions become possessions of the mind. These assets feel lighter, better, exciting.

He loves how the smell of exotic food tempts him to embark on yet another culinary adventure, how the sun rays suddenly break through the clouds and roll over a rice field, adding an extra brush of gold to that intriguing green color of the rice plants, how the afternoon chanting prayers at a nearby Buddhist temple put a calming vibe to his mind and to the remaining part of the day.

At every new experience, he feels like a child again. A child without worries about house repairs, mortgages, student loans, a complaining boss, a continuously growing mountain of work or a continuously lessening amount of free time.

Instead, his focus is mostly captured by the moment. He looks, wonders and fills his mind with memories instead of worries. These memories accumulate rapidly but they feel as light as a breeze in comparison to the heavy worries that he used to carry around. Now, he possesses so much less, but at the same time, so much more.