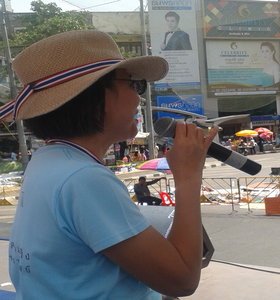 4 moments when you should reconsider coming to Bangkok

Bangkok is a great travel destination. However there are many inconveniences that make this city troublesome to visit as well. But I still advice you to give this place a chance. If you avoid it because of the described 4 moments then you might as well avoid it always. As with many major cities, there is always something going on.

It might seem fun to experience a public holiday in Bangkok, but it usually turns out to be a crowded and overpriced happening. Expect to pay much more for costs like transportation or entry tickets for clubs. The streets and transportation services can become very crowded during holidays. Also many shops will be closest during the holiday festivities. So if you need some service it is better to wait till the end of the celebrations.

Many Thai people will travel around to visit their families, so transportation in and out of the city can also become troublesome. A lot of accidents happen because of the crowded roads, and trains and buses will be fully booked or crowded. Popular holidays are the birthday of the king at 5 December, Songkran (Thai new year) from 12 til 14 April and Loi Krathong at the first full moon of the 12th lunar month.

2. During the rain season

The rain season usually causes many flooding problems. It really does not take much rain to turn a Bangkok road into a canal. During the rain season it is better to avoid Bangkok, because the water will drop down from above and crawl up from below. Transportation over the road becomes difficult. Walking is often not an option, or you have to consider it fun to bade in dirty and garbage filled water.

When the Thai are not fighting the water then they like to fight with each other. Demonstration rallies seem to pop up as soon as the rain and the canals start to disappear around November. The black of the water changes for the red and yellow of the protesters. Often the demonstrations are very peaceful gatherings, but occasionally they turn violent. Annoying aspects of the demonstrations are the road blockades and violent behavior.

The protesters want something so they will try everything in their effort to annoy the government as much as possible, which leads to violence, blockades, a lot of sound and parades. Due to the complicated and unpredictable nature of these gatherings I advice you to avoid rally sites. However you can easily have a great stay in Bangkok without being troubled by the demonstrations. There are just some places you need to avoid.

If heat and humidity are not your thing then Bangkok will make you suffer. It is supposed to be one of the hottest cities in the world. The heat is combined with a lot of smog from all the vehicles and the humidity makes it even more uncomfortable to stay in this city. Al factors combined cause a demolishing combination.

I recommend you visit the city between the end of December and the beginning of January. Then you will probably experience comfortable temperatures. . +/- 17 degrees is what the Thai consider a cold winter. However if you are not used to tropical conditions then this temperature is very nice. Unfortunately the “cold” period only lasts for a few weeks. Make sure to take advantage of it when planning a trip to Thailand.

Do not be discouraged

Where you looking forward to visit Bangkok and did I spoil the fun? Do not be discouraged by my article. Most of the times the described problems are more annoying then dangerous. If you are careful and easygoing then you can have a great time in the capital city of Thailand, every day of the year.

What is your favorite time of the year to visit Bangkok? Did some of the described problems make you reconsider visiting this city?